The Vidcon is located in the Meeting Room on the Tempest.

The vidcon is a holographic projection platform used primarily for real-time communication with personnel at various outposts or the Nexus, as well as with many allies.

Some characters, such as Dr. Kennedy, are only seen at the vidcon.

Some communications are automatically routed to the vidcon and don't require initiation through the terminal.

The vidcon can also be used to display visual aids: 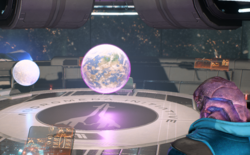 SAM will prompt Ryder that there are calls waiting on the vidcon if any are available.

When activated, the vidcon terminal will display a list of available calls; if no calls are available, there will be a message to that effect.

The following missions require Ryder to interact with the vidcon terminal: