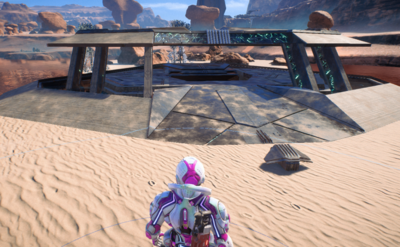 There is a vast network of ancient Remnant vaults spread across the Heleus cluster.

Vaults vary in size, complexity, and function. They are occupied by territorial Remnant bots. Smaller vaults are repositories of Remnant research and artifacts. Of the explorable planets, only Kadara has no minor vaults. H-047c only has one vault, but it is no longer a viable planet. Purification vaults are the most important, as they work with monoliths to control a planet's atmosphere. These are found on Elaaden, Eos, Havarl, Kadara, and Voeld. With the exception of the Havarl vault, these are expansive underground structures.

One of the devastating effects of the Scourge is the damage done to the atmospheric processing systems. With monoliths and vaults off-line across Heleus, planetary conditions range from inhospitable to uninhabitable. The most spectacular example of system failure is found on Habitat 7 during Planetside.

Putting the vault system back online on a planet will help the angara and the Initiative colonists alike. While it is possible to establish outposts on Elaaden and Voeld without resetting the vaults, it is quickest way to reach the required planetary viability. The outpost on Kadara cannot be established until the planet's vault has been reactivated.

Secondary vaults are primarily tied to specific missions. Progressing through the mission will lead to these vaults. These vaults don't change the viability of a planet.