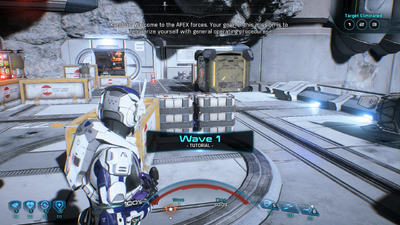 The Tutorial Mission is a private mission in multiplayer. 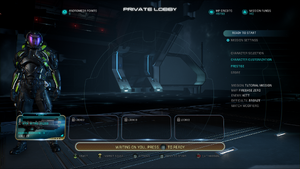 The mission settings are locked

and it is always played on Firebase Zero, the enemy faction is the kett, and the difficulty level is Bronze.

The mission has three waves that are fixed and always the same.

The object is to destroy three disruption field generators. Each generator will be targeted

in turn. Progress is shown in the upper right corner of the screen. No enemies are present in this wave and no points are earned.

The task in this wave is a Hack. The hack differs from standard hack in that it is not timed. The hack zone will be marked

. Locate and enter the hack zone, then stay inside to continue the upload. Entering the zone also triggers the security system. Enemies will approach, two at a time. Any enemies killed will be replaced endlessly until the hack is completed. Occupy the hack zone and keep it free of enemies until the data upload is complete. Then eliminate the remaining enemies to complete the wave.

Points are earned in this wave and badges are awarded.

The goal in this wave is to rescue a single survivor, then hold out for extraction. The time in this mission is 59 seconds, a full minute less than a regular Bronze mission. Enemies will attack during the extraction wave.

The survivor will be tagged with both

Points are earned in this wave and badges are awarded.

The Tutorial Mission only counts once toward the Tutorial Challenge the first time it is played, but can be repeated any number of times.

This mission can be used as a training ground for experimenting with new skills or weapons. The limited number of enemies can also help with earning points toward weapons challenges.

As long as you stay outside of the hack zone in Wave 2, the enemies will continue to spawn indefinitely. There will always be two kett Chosen on the map and they can be killed over and over endlessly to rack up points.

While this is considered a training mission, it still counts towards the following specific challenges: