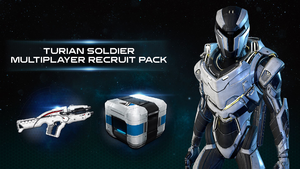 The Turian Soldier Multiplayer Recruit Pack is an add-on multiplayer DLC content pack that can be purchased from licensed vendors (Microsoft Store, PlayStation Store, Origin). This add-on can be discounted with a subscription to EA Access. 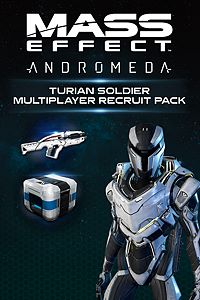 Join the fight to save humanity well equipped with the Multiplayer Recruit Pack – Turian Soldier Edition. This pack offers everything you need to hit the ground well-armed and ready for battle.
- The pack features the Turian Soldier character; the Turian soldier is a tough and versatile powerhouse. Though soldiers’ primary tools are their weapons, a Turian may utilize advanced armor technology to gain an edge in the fight.