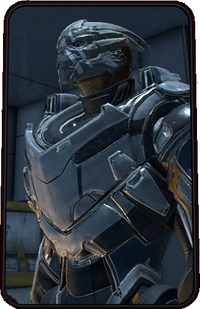 The turians are a Milky Way species.

Renowned as "men of action," the turians have a militaristic culture revolving around public service. Turians earned their place in galactic society after their actions in ending the Krogan Rebellions. They subsequently served as the peacekeeping arm of the Citadel Council and commanded the largest fleet in the Milky Way.

Turian society once relied on client species like the volus to build their economy and trade. In the Andromeda Initiative, the military training all turians undergo allows them to fill many vital civic and security roles, but many have also enrolled for entrepreneurial or diplomatic training to be better-rounded colonists.

Galactic events and their military doctrine have left lingering resentments between turians and some species. The turians were responsible for deploying the genophage against the krogan; and misunderstandings with humans led to the First Contact War, though humans and turians have since become cordial, if not close, allies. 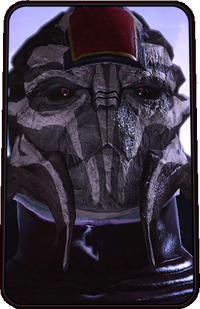 Turian culture is founded on public service and personal accountability. The turian military is the center of their society, functioning as a public works organization, as well as an armed defense force. Citizenship is conferred once turians have completed boot camp (begun on their fifteenth birthday) and promotion through the 27 citizenship tiers is judged on individual merit. At the top are the Primarchs, who lead colonization clusters.

Their inclination to military service and social trends mean fewer turians purse entrepreneurial careers, making the turian economy more vulnerable than most. The support of clients like the volus makes up for this deficiency.

Turians in the Andromeda Initiative operate outside a comfortable hierarchy. Interviews with prospective turian colonists indicate some are seeking this very freedom to forge their own destiny. Other colonists believe turian selflessness and civic structure will be vital to the Initiative's success. 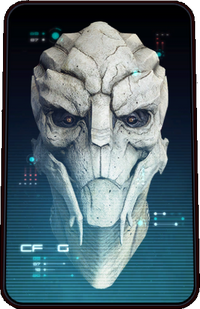 The turian homeworld, Palaven, has a metal-poor core, generating a weak magnetic field and allowing more solar radiation into the atmosphere. To deal with this, most forms of life on Palaven evolved some form of metallic exoskeleton to protect themselves. Their reflective plate-like skin makes turians less susceptible to long-term, low-level radiation exposure, but they do not possess any sort of natural armor. A turian's thick skin does not stop projectiles and directed energy bolts.

Unlike most sapient species in the Milky Way, turians are a dextro-protein species, meaning that food for levo-protein species like asari or humans can cause dangerous allergic reactions and vice versa. The only other known sapient dextro species is the quarians. As well as Palaven flora, turian scientists with the Andromeda Initiative paid the quarian Migrant Fleet handsomely for plants and fungi that were specially developed to thrive in hydroponic conditions. 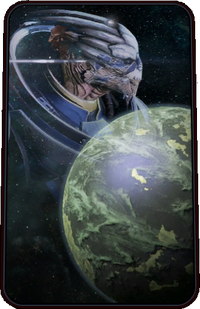 Before joining the Citadel Council that governs much of the Milky Way, the Turian Hierarchy was a formidable power with numerous client species supporting its powerful military. Rapid expansion from Palaven later led to problems with outlying colonies, when isolation and xenophobia led to infighting in what was termed the Unification War.

The turians made first contact with the Citadel around 700 CE, when the Krogan Rebellions were raging. When the krogan devastated turian colonies, the turians responded by unleashing the salarian-developed genophage against the krogan. Two hundred years later, the turians were invited to join the Citadel Council.

In 2157 CE, human explorers attempting to activate a mass relay were attacked by turian forces, as unauthorized relay activation was strictly illegal The resulting conflict, the First Contact War, saw the human colony of Shanxi occupied by the turians before the Citadel Council negotiated a peace.