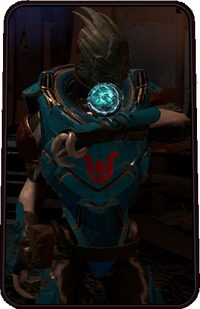 Cast out for criminal behavior or their actions during the uprising, exiles from the Nexus are no longer welcome at the station or Initiative outposts. Some have found a new home at Kadara Port, choosing to fight under Sloane Kelly's banner and embracing their title as Outcasts.

The militia's threat assessment lists the Outcasts as "as significant risk." Their particular animosity for the Nexus, honed by Sloane Kelly's security expertise, makes them a constant concern for the Nexus leadership. The Outcasts harass trade convoys, raid ore and ice transports, and pick off scout teams for their weapons and equipment.

There is no simple answer to stopping the Outcasts. Kadara Port is defended against APEX assault and Sloane Kelly has weathered numerous assassination attempts, retaliating against the Nexus each time. Meanwhile, every individual who must be exiled from the station is a potential Outcast recruit.

With Sloane Kelly dead, the Outcasts are unlikely to remain unified. APEX reports that the pirates are either scattering from Kadara Port, or being quietly but systematically hunted down by Collective loyalists.