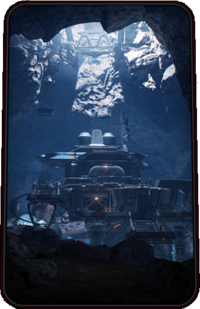 Few verifiable reports of the Collective exist beyond Kadara Port. They claim the Collective is a spy network of Milky Way outlaws and angara who use blackmail, espionage, smuggling, and hacking to gain leverage on Kadara.

The Collective is said to be led by "the Charlatan." No reliable data is available on this individual's identity, but the Charlatan has been quietly amassing influence since the Hyperion arrived in Andromeda. Those who cross the Charlatan are dealt with ruthlessly.

Intercepted transmissions show that the Outcasts consider the Collective's growing power a threat to their own position. The Outcasts' focus has shifted from harrying Nexus trade convoys to arms deals, putting them on a war footing. The Collective's response has been less public, but many Outcast supporters have lost their fortunes or disappeared without a trace.

Since Sloane Kelly's death, the Collective has gained control of Kadara Port. The situation in Kadara is still stabilizing, as Outcasts and Kelly loyalists are hunted down.

Publicly, Kadara Port is now run by Keema Dohrgun; behind the scenes, we are aware that the real power is Reyes Vidal, now revealed to be the Charlatan.

Without Reyes Vidal, now revealed as the Charlatan, the Collective is vulnerable to reprisal. APEX reports that Sloane Kelly has already ordered a purge of Collective sympathizers.