That vault is one of the terminal entries located on the Tempest. It is a follow-up email sent by Cora after the founding of Prodromos on Eos during A Better Beginning. There are two versions; which one is sent depends on whether Cora was on the squad in the Eos vault. 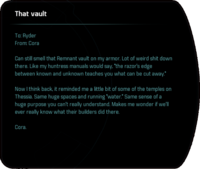 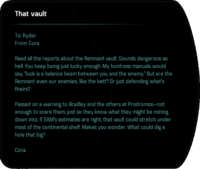