Consoles and terminals are found throughout Heleus, in buildings, on ships, or out in the open.

Consoles and terminals tend to favor a specific design style for each of the technology types - Milky Way, Heleus, and Remnant. It should be noted though that this isn't set in stone and devices may be different.

Emails are different than consoles or terminals in that they can only be accessed in very specific locations but work in much the same fashion. Email terminals are located on the Bridge and in the Pathfinder's Quarters on the Tempest.

Emails serve a number of functions:

After Meridian: The Way Home, an additional email terminal is added to Ryder's Room at Port Meridian. It contains a number of messages of gratitude. 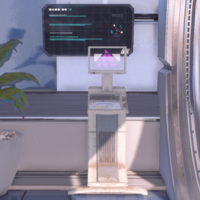 Heleus News Service stories are available at the news terminal in the located in the entryway nearby the Tempest in the Docking Area on the Nexus. Some are mission-related (EOS (HNS) - Prodromos Founded). Others are not (NEXUS (HNS) - Sun Lamp Reprieve Coming). 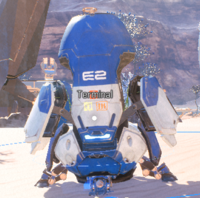 Forward station terminal entries give information on the planet's environment, research, and settlement.

Most planets have this type of terminal entry: