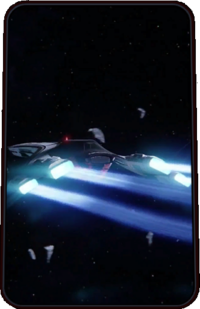 A starship travels faster than light using an element zero drive core. In special relativity, an object approaching light speed effectively gains in mass, until it would take infinite energy to propel it. But a negative electrical current running through an eezo drive core lowers the starship's mass, allowing it to travel at FTL speeds.

Motive force is provided by the ship's thrusters (chemical rockets, commercial fusion torch, or military antiproton drive), in addition to the FTL drive core. Without thrusters, the ship has no ability to move.

Standard drive cores build up a static charge during operation, and must be discharged periodically. Otherwise the core discharges into the ship itself, with catastrophic results. The Initiative's drive cores, intended for long-term voyages, are designed to recycle or reduce static buildup.