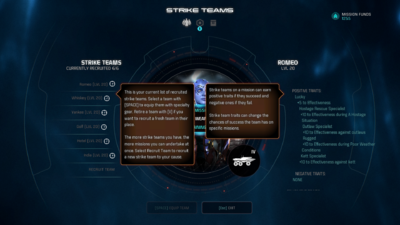 Access is granted to the console by talking to Tiran Kandros during First Strike.

There are three screens on the console, Teams, Missions, and Pathfinder Rewards. Mission funds are shown in the upper right, regardless of the screen. Using the console brings up the Missions screen.

There are two consoles, one in the Militia Office on the Nexus, the other in the Research Room on the Tempest.

Missions are listed on the left. Mission difficulty is indicated by a color coded icon - Bronze

. New missions are tagged with the new item icon

, those in progress are tagged with a clock

, and completed missions are tagged with a check box

. On the right is the description of the highlighted mission: status, time required, expiration information, mission brief, traits, and rewards.

in the center of a mission icon - Bronze

missions do not appear on the strike team console; they are only available through the Custom Match screen in Multiplayer.) When an APEX mission is highlighted, there is an option at the bottom to view details pertaining to the multiplayer form of the match. That screen will give the map in use, the difficulty, the enemy type, and the modifiers associated with the mission.

The central image sums up the mission: team dispatched, difficulty, enemy, and status. In the event that there are no missions available, the missions screen will be empty.

Selecting an APEX mission and choosing Play in Multiplayer switches the game to multiplayer and loads the custom match screen for that mission.

The Teams screen lists the teams on the left, with the highlighted team's information on the right: level, XP to next level (below level 20), traits, and equipment. Teams currently deployed are greyed out and tagged with a clock

. The central image shows team deployment status and equipment, if any.

If there are fewer than six teams, Ryder may recruit a new strike team. Cost depends on how many teams are currently active. Teams can be equipped or retired from this screen.

based upon mission difficulty. These rewards are shown stacked by type and difficulty. Research Data Loot Boxes are shown in a blue box and are stacked as a single item

. As with resource inventory, the quantity in the stack is shown in parentheses. There is a limit of two hundred items. A message will pop up when that limit has been reached, warning Ryder to collect rewards before embarking on another mission. Claiming all rewards at once will pop up a message about multiple rewards being collected.