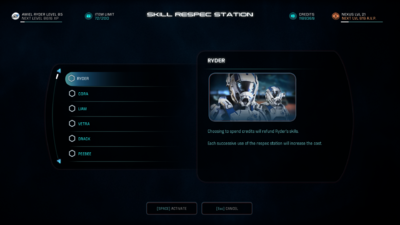 The first respec costs 20 credits whether you reset Pathfinder Ryder or a squadmate. 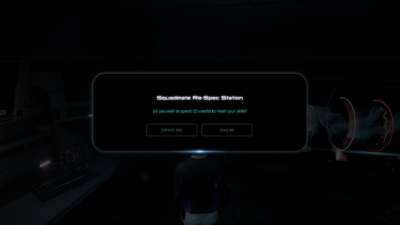 Select the squadmate to reset skills.

A credit amount will be displayed showing the current cumulative total for respec and the option to continue or cancel.

Confirming the respec request will bring up the Skills screen, where skill points can be assigned as usual.

Resetting skill points also resets all profiles except the corresponding profile chosen during Character customization, which returns to Rank 1. Further ranks and all of the other previously attained profiles will need to be unlocked again by spending skill points.

The interaction prompt on the equipment reads Re-Spec Station and gives access to the user interface for the Skill Respec Station.

Any weapons in the third and fourth loadout slots will be unequipped at reset. If Extra Holsters are purchased in Combat Fitness, Ryder will need to re-equip those weapons.

Favorites will be cleared out automatically by using the Skill Respec Station to reset Pathfinder Ryder's skills on the Tempest.