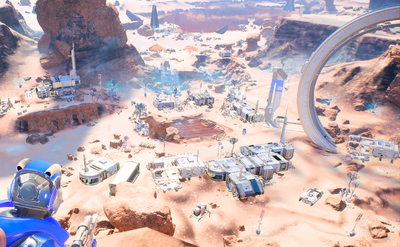 Site 1: Promise is one of the areas on Eos, and serves as a landing point for the Pathfinder prior to the construction of Prodromos.

Site 1: Promise is the first of two failed attempts by the Andromeda Initiative to colonize Eos, the second being Site 2: Resilience. Lacking the assistance of its Pathfinders, the Initiative was forced to begin colonization efforts on its own. Promise was chosen for its proximity to a water source, though this water proved to require further decontamination not achievable by its settlers. Eventually, a combination of the deadly environmental hazards on the planet and attacks by the Kett proved too much for the small outpost. After the death of most of its inhabitants, the site was evacuated and abandoned. When Ryder arrives to the site, only Clancy Arquist inhabits it, who runs an illegal salvaging operation from the outpost.

Tucked into the northern cliff-sides of Eos, Promise forms a "U" shape around the small water source located in its center. A Forward station will deploy by the water to allow fast travel to the location. Thanks to a seismic event that collapsed the ground to the southeast of Promise, the outpost effectively has only one entrance, a road leading to the southwest. Next to the Tempest's landing site is a large cargo container that holds the ND1 Nomad vehicle. A research center resides in the northeast portion of the failed outpost, where Ryder will find Clancy Arquist before he moves to a shuttle located in the northern portion of the site, where he will assume the role of a merchant.

The following missions take place or are acquired at Site 1: Promise:

Because Site 1 is fairly spread out with a number a buildings, finding all of the items can take a bit of patience.

For a complete list of items with pictures and scan data, see Site 1: Promise Research Data.