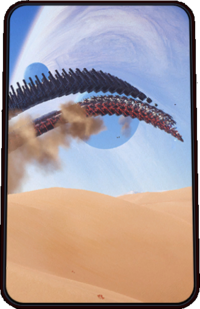 Over several months, the Nexus has received numerous unconfirmed reports of a huge Remnant construct in the Elaaden dunes. It is said to patrol a certain area of the desert, diving through the sand seemingly unimpeded and attacking intruders with overwhelming force. As no trace of such a construct has been found, and these witnesses are often found to be suffering from heatstroke, the Nexus is currently dismissing these claims as a "white whale" myth. Those who believe the reports refer to these constructs as "Abyssals."

If the reports are in fact accurate, the question arises as to the Abyssal's purpose. Such a construct might be used to extract and process valuable resources from the sand, using the kinetic pumping action to power it. Alternatively, the Abyssal might be used as a defensive measure for sensitive locations. Regardless, the reports all state that the Aybssal is impervious to weapons and indifferent to communications, suggesting that if it actually exists, this construct would be best studied at a distance.