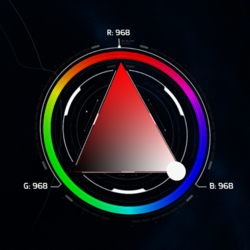 The RGB dial is used to customize the coloring of items and characters on different menus.

The RGB dial is used to change the following items:

Customization of colors using the RGB dial isn't an intuitive system. There is an outer color ring and an inner triangle shape.

The outer color circle can be rotated. The color on the outer circle that lines up with the 12 o'clock point of the triangle will be the hue that the triangle takes on.

The inner triangle allows you to move a circle around the triangle.

The exact location of the circle inside the triangle will be a combination of "color" from the outer ring, white, and black.

You are unable to type in the numbers like other color systems. 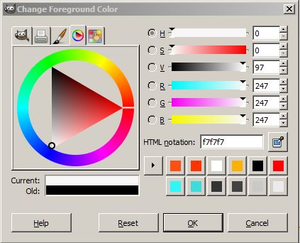 Unlike traditional RGB color systems that go from 0 to 255, the Mass Effect: Andromeda color picker has finer graduations from 0 to 1000. Because of this change, using third-party software to find a color scheme you like and importing those numbers isn't as simple.

It is possible to open third-party software, find an RGB color scheme with 0 to 255 numbers and convert them into 0 to 1000 numbers. The numbers will be pretty close but may have to be rounded up or down to get whole numbers as color pickers only allow the entry of whole numbers.