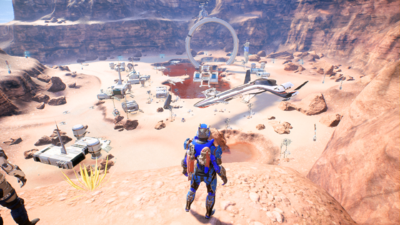 Prodromos is an outpost placed on Eos in the Fairwinds Basin. It is the first successful outpost of the Andromeda Initiative. August Bradley is its acting mayor.

Prodromos is the Initiative's first major success at colonization efforts in Andromeda, and represents the Initiative's goals in the galaxy, guided by Ryder's choices. Like its predecessors, the outpost is comprised of multiple modular buildings, shipped from the Nexus and dropped from orbit. Upon its establishment, the outpost is inhabited by a multitude of Initiative staff, and shuttles can be seen arriving and departing from its landing pads. Prodromos will also replace Site 1: Promise as Ryder's landing zone for Eos.

Comprised of a mix of one- and two-story buildings, Prodromos surrounds a lake in Fairwinds Basin. The lake, not yet safe for swimming, supports multiple landing pads for shuttles. Most of the buildings in the outpost do not have an explained purpose but all can be entered and explored. A research center stands on the northwest side of the lake. The local merchant is in a building on the eastern edge of the outpost. A Forward station is in place not far from the Tempest's landing site on the northern edge. The outpost is overseen by Mayor August Bradley, beloved and respected by the residents. The mayor can be found standing on the eastern side of the lake.

The following missions take place or are acquired in Prodromos:

The Hyperion model can be found here.

Because Prodromos is fairly spread out with a number a buildings and a number of the items that scan for RD are duplicates, finding all of the items can take a bit of patience.

For a complete list of items with pictures and scan data, see Prodromos Research Data.

If Prodromos is established as a scientific outpost, it will have multiple large turrets guarding its entrances. The military outpost lacks these.

If Prodromos is a military outpost, no additional soldiers or other military personnel will inhabit the outpost. All staff present are the same between both versions.

The choice between scientific and military outpost has minimal story impact. The differences show in dialogue, terminal entries, and forces available at the Battle for Meridian.

The shuttles that arrive at Prodromos are empty. They will briefly hover over the landing pad before departing. They seemingly have no purpose other than providing aesthetic.