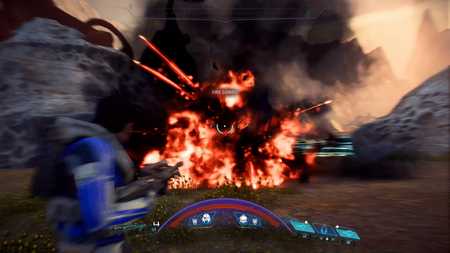 Power combos are specialized combat explosions that allow for extra damage and elemental effects. Power combos start when an enemy (or group of enemies) is primed, setting them up for a power combo, and then a detonator is used to detonate the explosion.

There are four types of combo explosions:

Many skills are primers, detonators, and some are even both.

Certain augmentations, profiles, and skills increase bonuses to combo explosions such as damage and/or radius.

To set up a combo explosion, an enemy must first be "primed" with a skill. Skills that can prime enemies are marked with different icons on the Skills screen that indicate their primer type.

The enemy will have to be successfully shot with rounds until there is a clear visual display that the enemy has been primed (ice, electrical charges, flames).

Booster ammo items are able to prime enemies in multiplayer for combo explosions:

The enemy will have to be successfully shot with rounds until there is a clear visual display that the enemy has been primed (ice, electrical charges, flames).

The enemy will have to be successfully hit with the melee weapon until there is a clear visual display that the enemy has been primed (ice, flames).

The Electric Firaan is NOT able to prime enemies for an electric Tech Combo.

Explosive canisters are found in many battle areas. The color of the container indicates the type of explosion that will happen when they are detonated. Detonating these containers with an enemy nearby are able to prime enemies for combo explosions:

The enemy will have to be successfully hit by the exploding container with a clear visual display that the enemy has been primed (flames, ice, electrical charges, biotic glow).

on the Skills screen. Any detonator will set off a combo explosion.

There is one exception to the detonators rules involving one unique melee weapon, known as the Batarian Gauntlet, in multiplayer. This melee weapon is wielded by the Batarian Scrapper and Batarian Vanguard and will act as a combo detonator. Targets must be suitably primed and then a successful melee attack performed to detonate the combo explosion. However, using this melee weapon to act a detonator will not count towards any of the challenges involving combo detonations.

The table below lists all of the skill primers and detonators.

Not all skills are available to every character:

The number of combos detonated can be tracked on the Accomplishments tab in the statistics menu.

Shield Disruptor augmentations when applied to leg armor cause extra damage when using a jump melee. When landing on the ground, a blast of elemental damage will radiate outwards causing extra damage. This elemental blast damage doesn't prime enemies though.

The following achievements and trophies can be earned for Power Combos:

Combos are the focus of the following challenges: