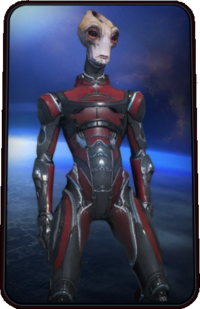 As her official biography states, like most female salarians, Zevin Raeka was originally groomed for a life of political intrigue as a Dalatrass. However, she broke with tradition to devote herself to exploration and the sciences. Despite lacking an official political position, Raeka's natural charisma drew followers from across salarian space, gaining her a reputation as not only a skilled scientist but also a respected and influential leader.

Raeka used that influence and family connections to benefit numerous ecological projects across the Milky Way, culminating in her greatest achievement: restoring the threatened biodiversity of her home world, Erinle, and enabling it to support a viable population. Her success on Erinle, combined with her leadership qualities and scientific expertise, drew the attention of Alec Ryder, who encouraged her to submit her candidacy as the salarian Pathfinder.

Raeka joined her people aboard the salarian ark Paarchero, which departed for Andromeda in 2185.