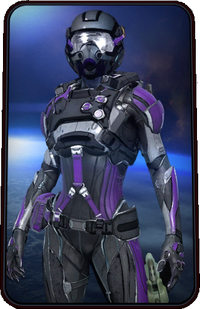 Publicly stating she was joining the Andromeda Initiative for spiritual reasons, Matriarch Ishara's centuries of diplomatic experience and popularity among the asari made her a strong candidate as Pathfinder. In her younger years, she served the Asari Republics as a judge before joining Thessia's diplomatic corps, and was more recently the architect of peace accords that ended seven centuries of bitter conflict in the Kormoth system.

Matriarch Ishara left the Milky Way aboard the asari ark Leusinia in 2185.

If Sarissa Theris retains the pathfinder position after Cora Harper: At Duty's Edge, the following text is added to the codex entry:

With Matriarch Ishara gone, her former bodyguard, Sarissa Theris, has taken up the mantle of asari Pathfinder. Sarissa is a famed combat veteran who has served in dozens of combat zones over centuries. Her psychological profile shows her to be both a charismatic leader and fond of high-risk, high-reward tactics.

If Vederia Damali takes over the pathfinder position after Cora Harper: At Duty's Edge, the following text is added to the codex entry:

With Matriarch Ishara gone and Sarissa Theris disgraced, the junior commando Vederia Damali has taken over as asari Pathfinder. Her service record shows few deployments, but her firearm and biotic test scores are above average and medical records show she is adapting well to her Pathfinder implant.