The Pathfinder Ranger is a pistol. It is available to players who purchased the Deluxe or Super Deluxe Edition. Tier V is the highest available for any Pathfinder firearm.

This submachine gun feeds data directly to a Pathfinder's SAM, allowing adjustments to the automatic weapon's balance, recoil, and heat buildup. The Ranger was subjected to intense weather conditions in an effort to damage its mechanisms. In dangerous environments, Pathfinders must have reliable tools. 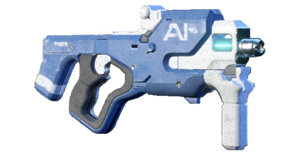 The following augmentations cannot be applied to the Pathfinder Ranger during development:

As the Pathfinder Ranger is already an automatic weapon by default, do not apply the Automatic Fire System augmentation to this weapon during development. This only wastes an augmentation slot.

Despite being classified as Rare, the Pathfinder Ranger only has 2 augmentation slots.

There is no multiplayer version of this weapon.