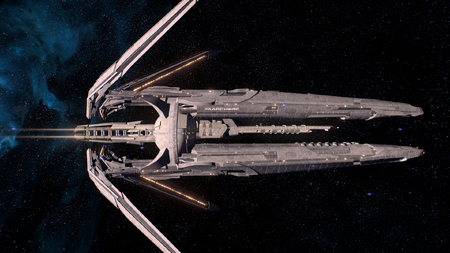 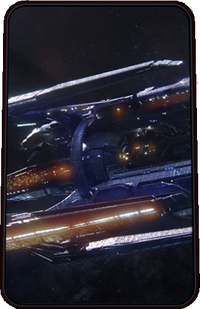 Ark Paarchero is the Andromeda Initiative's designated vessel for transporting salarian colonists to the new galaxy. Mirroring the design of its human counterpart, Hyperion, Ark Paarchero can accommodate 20,000 passengers and crew in cryogenic stasis.

Paarchero's development was plagued by early delays and disagreements between its senior crew and the Initiative's design team. The salarian penchant for constantly pushing the boundaries of technology was often at odds with the realities of budgets and time constraints. At one point, it was calculated that if every "vital and necessary improvement" suggested by the salarian contingent was incorporated into the Paarchero's design, its launch would have been delayed until 2204 at the soonest.

After considerable negotiation and debate, a compromise was reached and Ark Paarchero departed the Milky Way in 2185 in the initial wave of settlers under the command of Captain Lumont Hayjer.

Following a daring infiltration mission launched by Pathfinder Ryder and [her/his] team, the ark was safely rescued from kett forces and has returned to the Nexus.

Paarchero is related to the following missions: