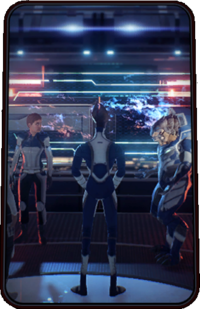 As the base of operations for the Andromeda Initiative, the Nexus leadership was always intended to be split between the Initiative proper, station operations, and colonial administration. Jien Garson planned to retain an honorary role, electing the asari Matriarch Nuara as Initiative Director.

Unfortunately, both Garson and Matriarch Nuara are listed as deceased, along with many of Nuara's senior staff. The current director of the Initiative, Jarun Tann, was eighth in line of succession.

In the wake of the kett attacks, Tiran Kandros emerged as leader of a de facto volunteer militia that has taken over station security. Though technically a civilian, Kandros is counted amongst the Nexus leadership.