The Nexus is a space station designed as the central support hub and temporary housing in Andromeda. Inspired by the Citadel, it is smaller and more streamlined than its Milky Way counterpart. While the Nexus will be largely functional at launch, many elements of its construction are only scheduled for completion upon arrival in Andromeda. Docked to the Nexus, the arks will provide additional power and storage to the station. 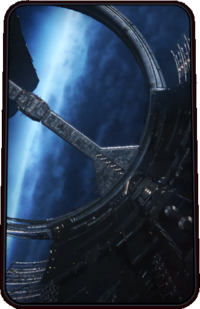 Intended as a safe anchorage, embassy, and financial center, the Nexus is a vast space station sent ahead of the main ark fleet. It traveled to Andromeda in an incomplete state to reduce fuel demands, with construction planned to be completed within a standard year after arrival. However, syncing with Nexus databases reveals that damage from the Scourge has set the timetable back significantly.

Returning arks anchor at the Nexus' central wheel, integrating their power grid and off-loading colonists for orientation and temporary housing before deployment to outposts. The Nexus collates and manages the resources which form the basis of the Initiative's economy, coordinates scientific research and defense, and acts as headquarters for Pathfinder teams. Once outposts are established, the Nexus will become the permanent seat of government for the Initiative.

The following missions take place or are acquired on the Nexus:

The tram station is the main transportation mode between areas on the Nexus and the Hyperion.

There are four tram stations located on the Nexus and the Hyperion. Interacting with a tram station terminal allows travel to any of the other three areas.

Available choices to travel to will show up as an interaction points that have to be actively selected before travel will be initiated to the destination.

After events in Meridian: The Way Home, the Hyperion choices will no longer be available to use on the tram station.

1 Monkeys in Space is exclusive to Deluxe and Super Deluxe Editions.
2 Despite what the tram station terminal says, the tram doesn't connect to the "Docking Bay" but instead connects the Common Area. The Docking Area can be found in the Common Area and there is no such location as the Docking Bay.