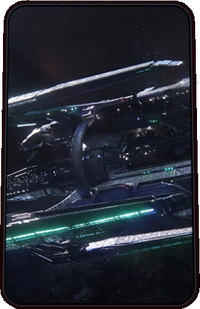 Ark Natanus was constructed in orbit around Aventen, a once-lucrative mining planet in the turian home system Trevba. The ark was named after the legendary spacefarer Palex Natanus, who is believed to be the first turian to travel through a mass relay. The Natanus is built to similar specifications as the asari and human arks, but with minor changes to accommodate her dextro-amino-acid-based passengers. Natanus is captained by the renowned Dea Praeton of the Sixth Fleet.

Like most economical ventures, turian investors were turned onto the Andromeda Initiative by their clients, the volus. The Turian Hierarchy was intentionally kept in the dark to keep the Initiative a private, civilian project.

Ark Natanus traveled to the Initiative rendezvous point in 2184, and left the Milky Way as part of the initial departure wave in 2185.

Upon arrival in Heleus, Ark Natanus hit the Scourge, causing severe structural damage. A skeleton crew was awoken in an attempt to control the situation, but all were either forced to abandon ship or were killed in the action. The casualty list includes the turian Pathfinder, Macen Barro, who died while trying to transfer SAM to former Spectre and security officer Avitus Rix. Because the transfer process was interrupted, the turian SAM's directives were corrupted and the AI focused all of Ark Natanus' resources on finding and reaching H-047c, the intended turian home world in Andromeda.

The ark's travels through the Scourge have left it too damaged to be returned to the Nexus. However, rescue attempts are underway to retrieve the 15,000 sleeping turians aboard. 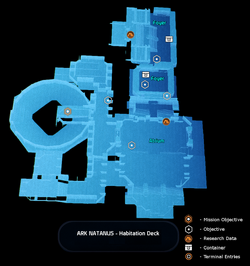 Natanus is related to the following missions:

During Turian Ark: Lost But Not Forgotten, the Natanus will become available to interact with in the Remav system.

Tempest sensors show severe damage to all sections of the turian ark from exposure to the Scourge. Due to hull instability, moving the Natanus would be ill-advised, but it should be safe for a recovery team to extract the remaining stasis pods.