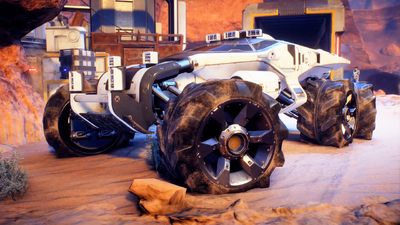 The ND1 Nomad, known in previous Mass Effect games as the Mako, is an all-terrain rover vehicle players can pilot on a planet's surface. The Nomad is more responsive than in previous games and is customizable as well.[1] 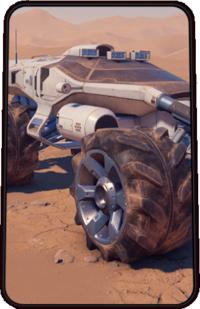 Seeking a suitable scout rover, the Andromeda Initiative purchased a promising but rejected design from the Systems Alliance military. The issue quickly became apparent: on rough terrain, without the bracing of heavy armor, the chassis was prone to twist. The Initiative had already developed lightweight but strong memory alloys which solved this problem.

The resulting ND1 Nomad exchanges heavy armaments for superior agility. The rover has a tripartite element zero core, which allows fine control over acceleration and a more modest helium-3 fuel cost for its microthrusters. Its lighter weight enables both six-wheel drive (6WD) and four-wheel drive (4WD), and four-wheel steering for hazardous surfaces. Fitting the Initiative's adaptive philosophy, the Nomad can be customized with appropriate camouflage or Initiative colors.

When necessary during long-haul exploration, the rover contains an emergency shelter. It can produce potable water from its hydrogen-oxygen fuel cells, though scientists recommend adding a flavor pack to it first. 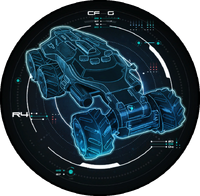 There are thirteen upgrades available for the Nomad.

Some upgrades are available for purchase from merchants at a cost substantially lower than the total cost of the materials.

Upgrades are automatically installed the next time Ryder enters the Nomad. In addition, stats are updated and blueprints are removed from inventory. 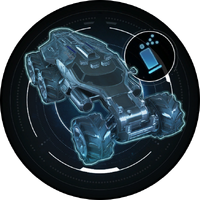 The Nomad can have customized paint jobs or skins which can be changed at a loadout station. Most paint jobs are available for purchase from certain merchants.

Two different physical versions of the Nomad ND1 are available in the Collector's Edition: a remote control (RC) vehicle and a diecast replica.

Statistics for the Nomad can be tracked on the Nomad Stats tab in the statistics menu.

Members of the Need for Speed team were brought on to help with the vehicle design.[2]

4 Midas Touch is available from the Pre-order Bonus.

6 Platinum is available for signing up for the Mass Effect Andromeda Newsletter at masseffect.com

7 Tabula Rasa is the default paint job for the Nomad.

The following achievements and trophies can be earned which are related to Nomad: