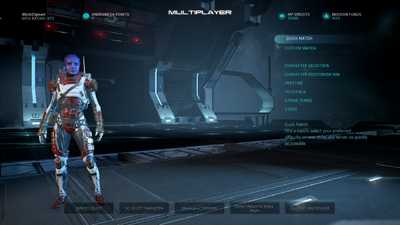 Mass Effect: Andromeda's Multiplayer mode allows players to choose from a variety of characters and team up to engage in real-time combat matches.

Multiplayer places players into a class-based, four-player co-op fire-team experience. It is a cooperative mode that encourages and rewards teamwork. Players can join together to survive escalating waves of enemies, complete a series of objectives, and extract from the battlefield.

At the completion of a match, all players will earn the same XP and Credits. XP earned increases character level and the matching bonus stat level. Credits can be used to purchase packs and items from the multiplayer store. With a wealth of unique character kits, there are always fresh and interesting builds to explore.

How to join multiplayer[edit | edit source]

Players can get to multiplayer directly from the game's main menu or from within the singleplayer campaign from the Game menu. Players can also jump to multiplayer from the strike team console in the Research Room of the Tempest or in the Militia Office on the Nexus. Selecting an APEX mission and choosing Play in Multiplayer loads the Custom Match screen for that mission.

See Multiplayer Match Strategy for some tips on playing matches.

Matches can be played with one to four members. The last character kit played will be the default one showing when entering multiplayer gameplay. There are a wide number of choices and customizations that can be made from the Main Menu.

Matches are played to:

Refer to each of the multiplayer main menu sections listed below for in-depth details on all of the available options and choices for multiplayer gameplay.

There is also a large selection of on-screen tips for multiplayer that appear during loading screens. See Multiplayer Loading Screens.

Once in multiplayer mode, there are several menu options:

Find a match, select your preferred difficulty, or search for any server as quickly as possible.

Create your own lobby and invite some friends, or search for a match with specific settings.

Choose a multiplayer class character kit from a variety of options, including different species and profiles.

Check out your collections, challenges, leaderboards, and bonus stats.

Develop your Strike Teams by sending them on missions, then tracking their progress.

Multiplayer requires an active network connection for gameplay. If at anytime this connection is lost, an onscreen display will happen alerting the player to this loss of connection.

The following achievements and trophies can be earned for multiplayer: