Meridian is a planet in the Saajor star system. 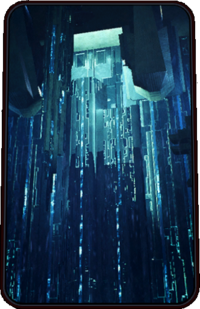 Evidence in the Aya vault shows the network of Remnant vaults across the Heleus Cluster is controlled from a central point known as "Meridian." When properly connected to Meridian, the vaults function as designed, terraforming and maintaining planetary conditions to make planets suitable for life. When disconnected, the vaults appear to either go into standby—as seen on Eos—or malfunction—as may have happened on Habitat 7—with disastrous consequences for their planet.

This proves Meridian's central importance to Remnant vaults and the planets of the Heleus Cluster. Whoever controls it can theoretically affect vault function, meaning they could control—or disrupt—the ecology of entire worlds.

Following the Archon's data led to a gigantic Remnant structure he had code-named "Khi Tasira." The Archon believed this to be Meridian, when it is actually just a command core. Records at Khi Tasira show Meridian itself was jettisoned to safety, when its builders faced the weapon which created the Scourge.

Meridian is a construct akin to a Dyson sphere: a vast, hollow shell encompassing a power source that provides heat and light to lush green biomes in the interior. My early studies of Jardaan records suggest Meridian was their laboratory and seed world, connected to each vault and constantly monitoring the progress of life there. However, even at quantum processing speeds, it will take decades to sift through all of Meridian's accumulated data.