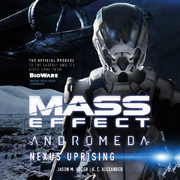 Mass Effect Andromeda: Nexus Uprising is the first official tie-in book for Mass Effect: Andromeda. It is a novel written by Jason M. Hough and K.C. Alexander and was released on March 21, 2017.

They slept for hundreds of years, dreaming of a new home in the Andromeda Galaxy. When finally they awake, their dreams of peace are shattered. These colonists- turian, salarian, asari, human, and more-face an uncharted galaxy and threats beyond understanding.

The Nexus is the core from which the colonists will explore their new home. Yet even before the arks arrive, the massive space station sustains critical damage. The entire mission is placed in jeopardy, and security director Sloane Kelly must reassert order while racing to identify the nature of the threat that faces them.

If she fails, the Andromeda Initiative could crumble.