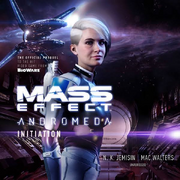 Mass Effect Andromeda: Initiation is the second official tie-in book for Mass Effect: Andromeda. It is a novel written by N. K. Jemisin and Mac Walters and was released on November 28, 2017.