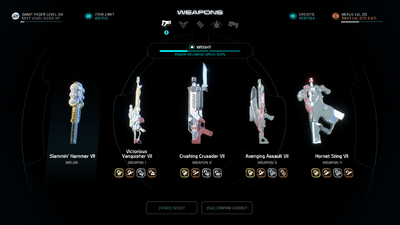 Loadout terminals allow players to change or modify their active weapons and mods, armor, consumables, choose squadmates, and customize the ND1 Nomad's look. A terminal is shown when deploying on a mission. It can also be accessed at a forward station or in the Tempest's Airlock just off the Bridge. The loadout screen will not be shown when arriving at the Nexus or landing on Aya, Kadara, or Meridian. It will be displayed when leaving Kadara Port for the Kadara Slums. Besides the normal locations for loadout terminals, there are a few missions and locations that have a Loadout terminal. These are marked with

The loadout window allows for the equipping of a melee weapon and two firearms by default. Additional weapon slots can be unlocked through the Combat Fitness skill at ranks 3 and 5.

Total weapon weight is affected by the number and type of weapons chosen at the Loadout terminal.

Melee weapons are weightless but each firearm adds more weight.

If Ryder carries too much weight, power recharge times are affected.

Certain skills can reduce the weight of guns:

Certain mods can reduce the weight of guns:

Certain mods can increase the weight of guns:

Certain armor can reduce the weight of guns:

30 weight points is the base level weight capacity with no weight modifiers in place. Using Tier I Initiative Armor, no skill points spent, and the Soldier profile would be a good example.

Weapons and mods that change weight have problems.

The easy thing to remember is that a single weapon and a single mod are reasonably accurate to the predicted weight numbers depending upon the weapon, weapon tier, and mod tier (except for pistols which are double what they should be). Additional weapons and additional mods cause weight increases to be higher than expected and weight reductions to be lower than expected.

Multiplayer functions the same as singleplayer with a few clarifications:

Due to the amount of customization possible, there are many combinations of weapons and skills possible. There are some guidelines that can be helpful for weapon weight:

It is possible with Auxiliary Systems, Barrier, and Combat Fitness to carry four Tier X Soned's at the same time (which is one of the heaviest weapons in the game) and still be at +100% power recharge speed.

Weapon weight in multiplayer is unique because of the combination of restrictions and changes over time.

At the start of multiplayer gameplay, weapons are heavy and limited in availability. Gameplay style should be tailored to the character kit, the skills the kit uses, and the weapon weight capacity increases possible.

As gameplay progresses, weapon selection increases and weapons go down in weight. With careful selection of weapons and weight reducing mods, eventually every singe weapon can be equipped by every single character kit with a +100 blue recharge speed.

Most guns can be outfitted with various mods to make them more powerful or specialized. Only one mod of a given type can be installed on a gun. For instance, two barrels can't be equipped on the same gun.

Helmets, chest, legs, and arms can be equipped in this window. Chestplates can be socketed with fusion mods.

To customize the armor's colors and patterns, use the Wardrobe in the Pathfinder's Quarters on the Tempest. To choose when the helmet is shown, see the Settings menu.

The loadout window allows for the equipping of 2 consumables by default. Additional consumable slots can be unlocked through the cryo pod perks Always Prepared and Versatility.

Two squad members can be selected. Some missions require a certain squadmate, so sometimes one will be locked in.

The Nomad's paint job can be customized in this window. Paint job selections are available on the left and can be previewed on the Nomad.

It is also possible to change certain equipable items using Item Pickup menu without having to be at a loadout terminal. This method has the advantage of being able to change armor, weapons, and consumables in the field but has limitations on what can be changed.

Detailed information about weapon weight capacity can be tracked on the General Stats tab in the statistics menu.