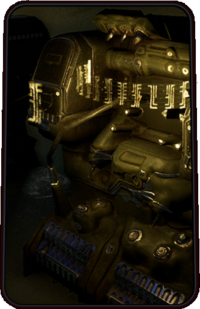 Study of kett technology reveals an interesting dichotomy. While their faster-than-light drives and equipment show less sophistication than Systems Alliance technology back in the Milky Way, the kett are vastly superior when it comes to genetic manipulation and biological analysis. Their weaponry eschews VI support in favor of targeting neurological systems or internal organs with unusual precision, and salvaged kett gear shows that even their battlefield medicine is exceptional compared to the Initiative's.

Nexus scientists believe this underlines the kett's interest in biological excellence. Their technology appears to serve a subordinate role to studying and improving one's own genetic superiority.

My analysis of kett technology from your scans suggests that it is highly mimetic. It follows the kett pattern of behavior: rather than conducting research and development, kett engineers incorporate features from other species and improve their designs incrementally. Remnant and even Initiative-inspired changes are already beginning to appear.