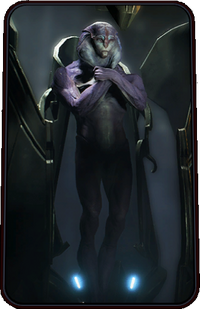 The facility on Voeld has revealed a key element of kett strategy and biology. The kett do not recruit soldiers: they take prisoners and submit them to "exaltation." This process transfers beneficial genetic traits to the kett, and turns the "donor" into a fanatically loyal exalted, many of whom serve in the kett military. Most of the individuals we have fought appear to be exalted angara.

The exaltation process appears to be two-way, transferring carefully selected kett traits into the donor. The resulting mutations permanently alter the physical appearance and glands of the donor, inducing hormonal changes that cement the individual's loyalty to the kett.

Scientists on the Nexus suggest that exaltation may have originated out of necessity. If long ago, the kett somehow reached a state of genetic stagnation, adopting the genetic traits of others may have been their only means of survival. Today it is a ceremonial, if morally repellent, cornerstone of kett culture.