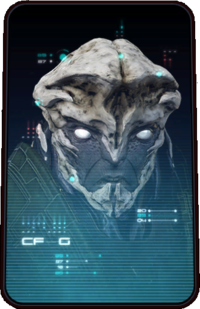 Kett are an Andromedan species.

Led by the Archon, the kett are a powerful and technologically advanced species whose home space lies beyond the Heleus Cluster. The kett encountered here are an expeditionary force seeking lifeforms for exaltation, as well as secrets of the Remnant technology left behind in Heleus. Evidence suggests they arrived in Heleus roughly seventy years ago.

As we have learned, kett multiply and replenish their armies via "exaltation," where the kett take desirable genetic traits from other life forms and incorporate them into the kett genome. The "donor" life form, in return, is mutated with kett DNA. Kett view this exchange as an almost sacred process of self-development, though our scientists disagree.

The kett themselves remain enigmatic. We know they value genetic and physical superiority, that they willingly enslave other species, and that they have positions throughout the Heleus Cluster. Unfortunately, a sustained dialogue or diplomatic overtures seem impossible, as the kett ruthlessly exploit any attempt at peaceful communication.

However, your investigations show a rift between the kett in the Heleus Cluster. While they remain a threat, evidence shows the Archon has prevented his subordinates from communicating with their home space, and that many have begun speaking out against him, given his obsession with the Remnant.

The following portions of the codex entry appear early in the game but are replaced during gameplay as more information is gained on the kett:

According to Nexus officials, the aliens encountered on Habitat 7 are known as the kett, a species that has proven hostile in every reported encounter. Little is known about them or their motives. The kett possess technology and weapons at least on par with the Initiative's and have been responsible for the death or capture of many Initiative personnel.

The only commonality is that the kett have a clear interest in the strange structures and technology seen on Habitat 7 and, as we now know, on several worlds in the Heleus Cluster. Scouts and prospecting teams trying to investigate this technology are invariably attacked by the kett, who take any scans or research materials by force. Why the kett have such an interest in this technology is unknown, but the Nexus has issued warning bulletins to all off-station teams to avoid these sites for their own safety.

The number of kett defeated can be tracked on the Accomplishments tab in the statistics menu.

Kett are the focus of the following challenges: