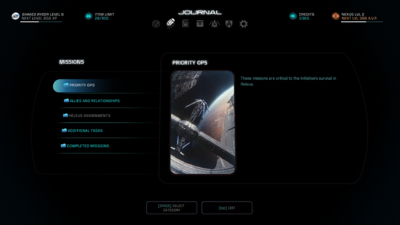 The Journal is an in-game function designed to help you keep track of your missions in the Heleus Cluster.

While the Journal may sound like an intuitive feature, there are a number of features and functions that aren't explained during gameplay.

The Journal can be accessed from the Main Menu during gameplay and provides a categorized list of all missions currently available and completed.

There are five main categories in the Journal. The Heleus assignments category contains subcategories for each location where a mission may be acquired. 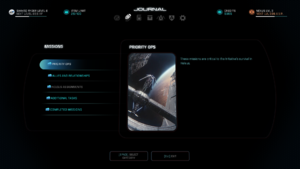 Priority ops are the backbone of the story. While they don't necessarily provide the greatest XP rewards, they do provide the largest AVP rewards, making the largest contribution toward the goal of the Andromeda Initiative. Completing most priority ops adds star systems to the Galaxy Map, adding opportunity for adventure. 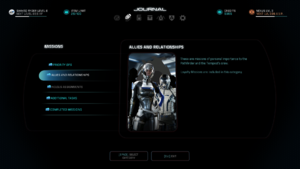 Allies and relationships missions add to the richness of the story but aren't required to be completed. Romance and loyalty missions fall into this category. Many of these missions are smaller and mostly narrative, providing a glimpse into a squad or crew member's personal life. These smaller missions, for the most part, tend to have no XP or viability rewards. 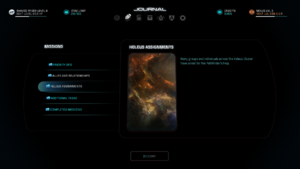 Heleus assignments deal with the issues and concerns of the major planets/starships. All vault missions and outpost establishment missions are Heleus assignments. These missions vary in difficulty, range, and reward. All except Monkeys in Space provide XP, most provide some AVP and planetary viability. 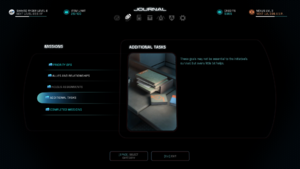 Additional tasks are optional missions that range from very short to very lengthy missions. The XP rewards range from +270 XP to +1330 XP. Some include viability rewards, some include monetary rewards. The small rewards of these missions individually doesn't amount to much but this category has sixty-two missions, which can add up quickly. It should be noted that some of these missions are prerequisites for Heleus assignments 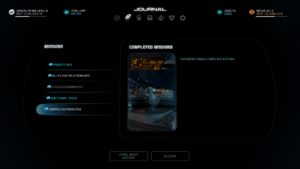 This category is for any missions that have been completed. Some missions, such as Task: Researching Remnant or Temporary Crafting Quest, autocomplete and can only be found in this category.

There are a number of missions that don't appear in the five categories of the Journal for various reasons.

Each category lists currently available or completed missions. The Heleus assignments category is broken down into subcategories. Each mission can be selected for review.

Each mission when selected will have the following detailed information:

New missions will have a

symbol next to the name of the mission. This symbol tracks upwards through the categories to the main five categories for ease of finding new missions.

The current tracked mission will have a

Objectives that appear on screen normally will appear in the journal under the appropriate mission. However there are a few exceptions:

At some point, the

symbol will get locked to the Journal at the top of the screen. This is due to ghost missions that aren't displayed in the Journal and as such don't allow you to check the new item to make the symbol go away. Once this happens, you will have to open the Journal screen and check to see if any of the categories are showing a new mission has been added.