Invitation (Pathfinders only) is one of the terminal entries located on the Tempest. It is an email received after all Pathfinder missions have been completed (Hunting the Archon, Cora Harper: At Duty's Edge, and Turian Ark: Lost But Not Forgotten). There are two versions; content depends on who Ryder chooses to save on the Archon's Flagship during Hunting the Archon.

Acknowledging the email sets up an unjournaled event; the next time Ryder enters Pathfinder HQ on the Nexus, the promised gathering occurs in a cutscene.

Save the Krogan Scouts[edit | edit source] 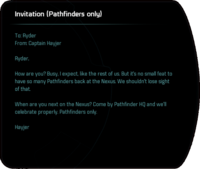