The Heleus cluster and an ark ship.

The Heleus cluster is a region of the Andromeda galaxy. Comprised of over thirty observed systems, the Heleus cluster is a star cluster on the outer fringes of Andromeda. Heleus, as it is commonly known, was chosen as the Andromeda Initiative's destination after long-range surveys suggested it had an unusually high number of habitable worlds. The cluster also has a large black hole at its center, whose formation may have been the cause of Heleus's rich element zero deposits.

Surveying and classification of Heleus is an ongoing process. While some planets have official names, others are still known by their initial survey data: "H" (for "Heleus Object") followed by a catalogue number.

The following star systems and planets/points of interest can be accessed in this cluster: 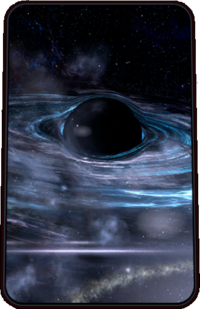 At the center of the Heleus Cluster is a black hole, a huge star that has collapsed into a region of space-time with gravitational effects so powerful that even light cannot escape. This example is believed to be a Kerr black hole approximately 12 stellar masses in size, and appears to have absorbed additional mass from nearby systems. Our scientists believe that the radiation released from the creation of the black hole may explain the abundant element zero found in Heleus.

In the Milky Way, study of black holes was still in its infancy. The forces around the event horizon typically destroy probes before they can transmit their data. This black hole presents a unique opportunity for study even at a remove.

The original asari surveys of Andromeda called the black hole Ardat Hekas, "demon's maw." Initiative charts refer to it as H-012 Ketos, after the mythological sea monster that intended to devour the princess Andromeda.

According to their scientific journals, angaran astronomers called the black hole Haranj (roughly: "the fisher's lure") for the observable effect it has on comets and surrounding systems. The gravitational lensing effect of the black hole has allowed the angara-controlled planet Aya to go largely unnoticed by the kett.