While the Andromeda Initiative's long-range scans have identified several potentially-habitable planets in the Heleus cluster, the possibility of encountering harsh planetary conditions during the search for a suitable Golden World exists. The Pathfinder and their team will be responsible for assessing and exploring any environment deemed necessary as the mission unfolds.

Damage from hazards can change the color of the Heads Up Display (HUD). 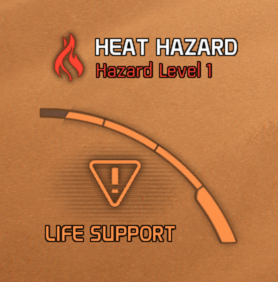 As a final warning that the Nomad is about to explode, when all Life Support is depleted and 10% of Nomad health is left, an audible pulsing buzzing sound will alert that death is imminent.

Hazard type doesn't change the damage amount to Life Support. A Heat Level 1 hazard damages the same as a Cold Level 1 hazard. This same pattern follows for all hazard levels.

Pathfinder Ryder and the ND1 Nomad take damage to Life Support any time that an environmental hazard is encountered.

Depleted Life Support will replenish fairly quickly as long as Pathfinder Ryder and the ND1 Nomad stay in a SAFE CONDITION area.

As hazard level increases, the amount of time before Life Support is depleted decreases rapidly. Level 1 Heat hazard may take 60 minutes to fully deplete Life Support while Level 4 immediately depletes all Life Support and shields on contact with 1 additional second of contact killing Pathfinder Ryder and destroying the ND1 Nomad. Entering a lava pool is a Level 4 Heat Hazard.

Difficulty level influences how long hazards will take to deplete Life Support and how long until death occurs. The easier the gameplay, the longer the amount of time until Life Support fails. Once Life Support fails, health damage occurs until either Pathfinder Ryder dies or the ND1 Nomad explodes. Conversely, the harder the difficulty, the less time is available.

Life Support and health times in the tables below are displayed as Narrative, Casual, Normal, Hardcore, and Insanity.

1 Backup Life Support adds extra time to Life Support for Level 1 & Level 2 hazards. There is no change to Level 3 hazard time. The time numbers listed in the table are for a single use of the consumable while hazard damage is occurring.

3 Defensive Fortification directly increases the health of the ND1 Nomad for any difficulty. This upgrade increases the amount of time the Nomad can endure health damage due to Life Support depleting conditions before death.

Hazard zones are fixed. The only thing that can change the hazard level of a location is the activation of a planet's primary vault. Planetary hazards that are affected by the vault will show a sharp change: the radiation on Eos goes from Level 3 to safe conditions after the radiation has cleared. However, Voeld's cold hazards are bugged and don't function correctly. See - Notes

Certain hazards are not affected by activation of the primary vault. These are localized hazards such as ferrofluid pools, fires, scourge tendrils, toxic sludge, etc.

Planets that Pathfinder Ryder can visit each have their own environmental hazards prior to the activation of the Remnant vault. Once the vault is activated, the Hazard Levels will be removed.