H-047C (HNS) - Turian Ark Recovered is an entry on the HNS terminal in the entryway of the Nexus. There are two versions; content depends on whether Ryder convinces Avitus Rix to become the turian Pathfinder during Turian Ark: Lost But Not Forgotten. 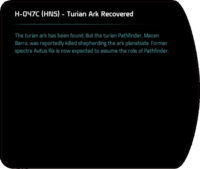 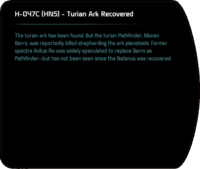