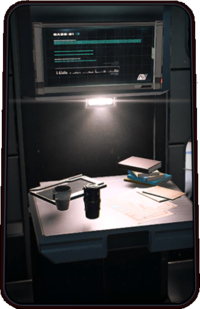 A brief refresher of terms used in Andromeda Initiative literature:

AMMUNITION BLOCK: A solid block of metal loaded into a gun. Sand-sized particles are sheared off by the gun's targeting mechanism and then fired as projectiles, allowing a single block to provide ammunition for multiple combat encounters.

CITADEL: A massive, ancient space station in the Milky Way that acted as the political and cultural center of the galaxy.

COMM BUOY: A communications buoy that relays data through corridors of mass-free space.

EXTRANET: A publicly accessible information network across the Milky Way, akin to a planetary internet on a galactic scale. Such a network is slowly being developed in Andromeda while communications are established.

HARDSUIT: An exploration / combat suit, usually armored with titanium or ceramic plating, and equipped with kinetic barriers to protect against hostile fire and environmental hazards.

HEAT SINK: Also known as a thermal clip. A detachable coolant-filled sink used to prevent weapons from overheating. They must be ejected and replaced regularly during firefights.

FLASH-FORGING: Immediate manufacture of a usually short-lived object from raw materials, using an omni-tool or other fabrication device. Omni-blades are typically flash-forged.

MASS ACCELERATOR: A railgun that lowers the mass of a projectile and then hurls it at relativistic speeds. Sufficient acceleration allows even tiny projectiles to impact with tremendous force.

MASS RELAY: A network of mass transit facilities across the Milky Way, used to immediately transport starships hundreds of light years. No such network exists in Andromeda.

MEDI-GEL: A sterile medicinal salve that bonds to flesh, immediately sealing injuries against bleeding or infection. It can be removed with a small ultrasound pulse.

MINIFACTURING: Small-scale manufacturing of 3D objects often on the battlefield or for emergency repairs.

OMNI-GEL: A compound of alloys, ceramic, and other materials suspended in a semi-molten state used with an omni-tool to build small objects almost instantly.

OSD: Optical storage disk. Can contain data, or the blueprints and programming used in minifacturing.