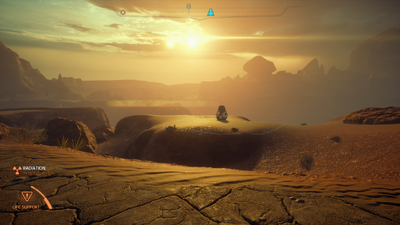 Forward stations are Andromeda Initiative checkpoints that provide a number of benefits.

on the map. Each forward station adds 2 AVP and increases planetary viability by 2%. (See Notes for exceptions)

to the map, acts as a fast travel point

, allows changing loadout, restocks the squad as a large supply cache, and allows calling the ND1 Nomad if it gets lost or destroyed. Forward stations also repair damage to the Nomad and act as a safe zone to restore life support while protecting the squad from any environmental hazards. In addition, forward stations established in an Initiative outpost are equipped with a research center.

On Havarl, where the Nomad cannot be deployed, direct extraction to the Tempest is available at a forward station.
On H-047c, because you can't leave the Nomad, normal functions of a forward station aren't available. Loadout, research center, and terminal entries won't work. Most of the domes have a marked loadout terminal 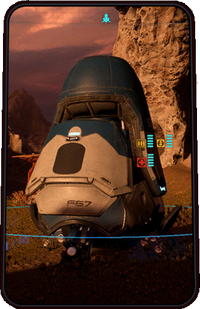 Automated forward stations are part of the initial wave of exploration or colonist deployment. They contain valuable resource caches for explorers to resupply, repair stations for vehicles, and ground-penetrating sensors to identify mineral deposits. Their presence improves the chances of a planet being considered viable.

Current resource constraints mean that, in theory, only Pathfinders have official sanction to call down forward stations. In reality, reports show that enterprising colonists or unscrupulous scavengers have been know to hack the signals to raid the stations for supplies.

Forward stations can be interacted with for additional planetary information. These function in the same manner as terminal entries provide information on the exploration of the planet.

The forward station called down to Site 1: Promise on Eos during A Better Beginning does not provide AVP or planetary viability. However, the first landing on Eos with the Tempest does grant 2 AVP and increases Eos viability by 2%.

The forward station on the vault island on Eos doesn't grant AVP or viability bonuses.

Forward stations on H-047c only award AVP as what remains of the planet can't be made viable.

The number of forward stations established can be tracked on the Accomplishments tab in the statistics menu.