Elaaden is a planet in the Zaubray star system, initially designated Habitat 2. It is occupied by krogan. The heat on Elaaden can be deadly, the water is scarce, and mysterious ancient artifacts are scattered across the landscape, guarded by dangerous Remnant creatures.

The following missions take place or are acquired on Elaaden:

This anomaly appears after completing Architect on Elaaden.

This Remnant Architect's programming directives have been interrupted. It is in an orbital standby mode and remains tethered to its home planet Elaaden. From this unique vantage point, it's clear that the extreme heat of the planet had begun to degrade (i.e. fry) vital systems. Many systems seem to be incorrectly pinging "all clear". 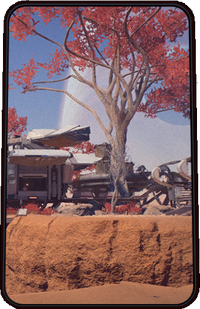 Elaaden is the scorching desert moon of a gas giant. Identified on Initiative charts as Habitat 2, Elaaden was considered a "golden world," despite its harsh conditions, because of the moon's vast mineral wealth. Tidal gravitational effects cause plumes of sodium silicate to erupt from Elaaden's core, depositing unusually pure silicon sand across the surface—invaluable for manufacturing high-performance computer hardware.

Orbital surveys show that contrary to projections, Elaaden is almost devoid of water vapor, making long-term settlement or mining efforts unlikely. Those who live on Elaaden face a constant struggle for survival. Able to thrive in environments that would kill most organic species in days, the krogan who departed the Nexus have established a colony on Elaaden and defend their sovereignty fiercely. The Nexus advises travelers to avoid Elaaden if possible.

The activated Remnant vault has increased the presence of cloud-forming particulates in Elaaden's sky. Though the moon is still brutally hot, moisture levels have noticeably risen, increasing ambient humidity and the likelihood of rain. The Nexus scientists advise that the inhabitants of Elaaden, once starved for water, should prepare for flash floods.

This text is inserted if Ryder gives the Remnant drive core to Nakmor Morda:

After the gift of a valuable Remnant drive core, the krogan colony of New Tuchanka is now allied with the Initiative. Overlord Morda shares leadership with the Initiative's assigned representative, Kariste Archana. The Nexus is gathering a negotiation team to draw up mineral and water claims on Elaaden. There is no data on whom the krogan are choosing as negotiators.

Elaaden is a desert world with scorching levels of heat prior to activation of the planet's vault. All areas not in constant deep shade or indoors will cause

HEAT HAZARD damage and pose an environmental hazard to personnel and vehicles.

Found in the northern dune regions, the Remnant Abyssal can be seen erupting from the dunes in a large arc before plunging back into the ground. This Remnant construct can't be damaged or interacted with in any useful way. That doesn't stop Drack from voicing an alarm.