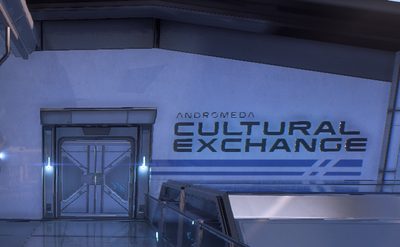 The Cultural Exchange Center is a location in the Common Area on the Nexus. It houses the archives of the combined history of the many Milky Way species. The holo-displays and VI's in the public gallery assist visitors in learning about the Initiative people and their origins. 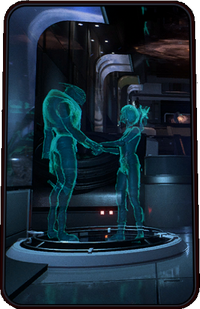 The Cultural Exchange was created to support the Andromeda Initiative's principles of peaceful exploration in the new galaxy. Given the high likelihood of contacting sentient alien life in Andromeda, the Exchange was designed to educate and inform local species about the history and intentions of the Milky Way settlers. The hope was to avoid any misunderstandings which could lead to suspicion or hostilities, and instead foster an air of cooperation beneficial to all.

With first contact established between the Initiative and the angara, the Cultural Exchange has become the Initiative's de facto embassy. Behind the scenes, diplomatic staff are preparing briefs for the Nexus leadership on angaran culture and social cues. Orientation and language classes have begun for angara who wish to have a more long-term role on the Nexus or serve in the militia.

The following missions take place or are acquired in the Cultural Center: 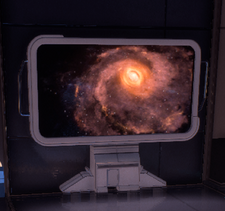 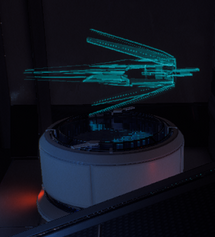 This is Ark Hyperion, one of several ships that made the long voyage from the Milky Way galaxy to Andromeda. The thousands of colonists aboard have come in peace, united by their dream of a better life in your beautiful galaxy. You need not fear their arrival—we are all citizens of the universe, eager to be your friend. 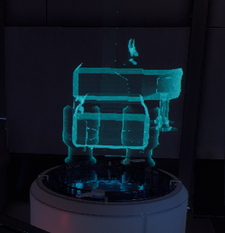 This is an outpost for Milky Way colonists arriving in your galaxy. They come seeing a fresh start in Andromeda, yearning only for a land they can call home. If you encounter an outpost, feel free to drop by and say hello! Your new neighbors are eager to make friends. 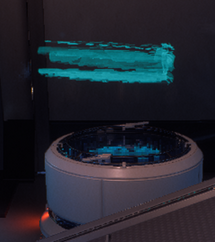 This is an image of the Citadel, considered the seat of government for many civilized races in the Milky Way galaxy. Here the Council deliberates on matters of state. It is a champion of the common citizen, eager to help those in need. As will all political institutions in the Milky Way, conflict is rare. Peace and cooperation are the rule of the day. 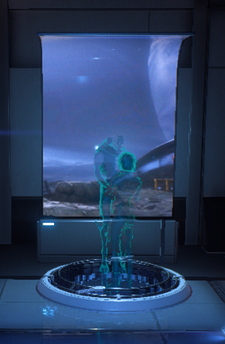 In the year 2157, human explorers chanced upon a galactic gateway, leading to their first encounter with the turians. Hostilities erupted. However, the governing body in the Milky Way—the Citadel—quickly intervened. They brokered a truce between turians and humanity. Their antagonism faded, and within a few decades the two species were allies. This outcome illustrates how Milky Way races believe a peaceful solution can be found to even the most intractable disagreements. 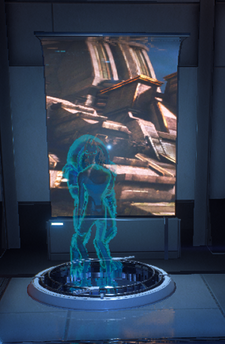 It was nearly 3000 years ago when the krogan and salarians first met. War and ignorance had decimated the krogan homeworld. The salarians "uplifted" them, rescuing the krogan from likely extinction. The salarians gave them technology and a new planet where they could thrive. In return, the krogan defeated a hostile race threatening galactic peace. Theirs is a complicated relationship—but one showing how species who disagree still co-exist in the Milky Way. 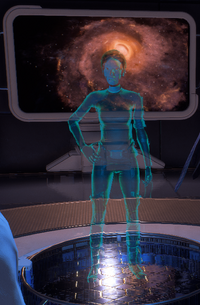 Hello there, neighbor. I'm Jien Garson, the founder of the Andromeda Initiative. I thought you might like to hear more about our plans.
<Tell me more.>
Great. If you're seeing this, it means our Pathfinders have done their job and made new friends in the galaxy: welcome to the Nexus. But I want to put your mind at ease. Seeing our arks arrive in your neighborhood probably raised some concerns. I'm happy to address them.
<Your intentions.>
Great question. I'd be worried about that, too. I can assure you: we have no hostile intentions whatsoever. We're pilgrims who simply want to live in peace. We're eager to learn about new cultures, new ideas, and share our own with you. But we understand trust needs to be earned, no matter what galaxy you're in. And the Initiative looks forward to doing jut that.
<Why come here?>
I get that question a lot. Many of us have a deep curiosity that needs to know: what else is out there? Our own Milky Way is just one tiny speck in a universe full of mysteries. And speaking for myself, the thought of exploring those mysteries in Andromeda was a call to adventure I could not resist.
<Log off.>
Thank you for taking the time to listen. On behalf of my fellow Milky Way travelers, we couldn't be more excited about what the future holds for all of us. 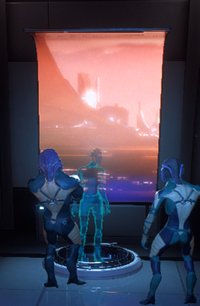 Welcome, native of Andromeda. My people are known as asari. It would be my pleasure to tell you about our kind.
<Tell me more.>
Very well. Asari are the oldest civilized race in the Milky Way galaxy. Among my people, diplomacy and cooperation are prized over war or conflict.
<Your home world.>
Asari come from a planet know as Thessia, which many consider the crown jewel of the Milky Way. It's a thriving world blessed with prosperity and peace, and the center of the largest economy in the galaxy. With the high concentration of element zero on Thessia, asari evolved powerful biotic abilities. It is considered a hallmark of our species.
<Your history.>
Thousands of years ago, we played an important role in founding the Citadel Council, the seat of government for our home galaxy. In the ensuing centuries, asari placed great value on cooperation and collaboration. Many species looked to us for leadership and guidance. Due to our lifespan—sometimes reaching 1,000 years of age—we are patient in our decisions, and prefer long-term solutions over short-term gains.
<Log off.>
Farewell. We look forward to forging new bonds with our friends in Andromeda. The wisdom you share is our reward. 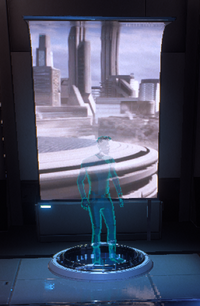 Hello there. I'm a human being. If you'd like to know more about my people, just ask.
<Tell me more.>
Good to hear. Humanity is a diverse species. You may notice different skin colors or religious beliefs among our people. Yet we don't let those differences come between us. We'd rather celebrate our diversity, rather than fight over it.
<Your home world.>
Humans come from a planet called "Earth." It's a beautiful blue world, with everything from oceans to jungles, snowy mountain peaks to deserts. It's also an oasis of biological diversity. Scientists calculate Earth contains nearly 9 million unique animal and plant species.
<Your history.>
Humanity is a young people compared to many of the other Milky Way races. We didn't discover space flight until much later. But what we lack in age, we make up for with enthusiasm and a pioneer's spirit. We'd like to thin we can teach our fellow travelers a few new tricks.
<Log off.>
I'm glad you stopped by. Next time you see a human, ask about ice cream. It's one of the many great things we bring to Andromeda. 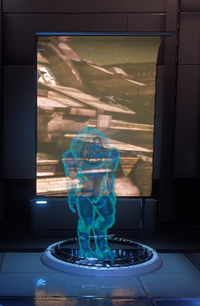 Hi there. Thanks for stopping by. I'm a krogan. Are you interested in hearing more about my people?
<Tell me more.>
Of course you are. We may look scary, but don't let that worry you. It comes from living on a harsh world. We're a species that knows how to thrive even under the worst conditions.
<Your history.>
Colorful, you might say. Growing up in our neighborhood, only the toughest survived. That usually meant a lot of fighting. You'll hear stories, so no sense covering it up: we once had a great society, but I'm ashamed to say we squandered it. It's why a lot of krogan are here in Andromeda now. They're the smart ones, the ones looking for peace and a fresh start.
<Your home world.>
An ugly rock called Tuchanka. No sense lying—it's not a planet most people want to visit. We had predators, nasty weather, and not much else. But it gave us our identity. Forced us to adapt and evolve—everything about us is built for survival. How many species do you know that have a pair of spare lungs, just in case? Or four testicles?
<Log off.>
Thanks for chatting—we're all looking forward to meeting our new neighbors. 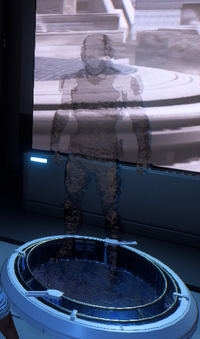 This VI is added during the mission Task: Programming a Pathfinder. Choices made during that mission will determine future interactions with this VI.

Welcome to the setup for your Pathfinder informational VI. I am programmed with all relevant data. However, you must identify which information I should prioritize. First, select your preferred voice and appearance: male, or female?
<Male.> <Female.>
Variable set. Which aspect of the Pathfinders' role should be highlighted: exploration and discovery, or first contact with new species?
<Exploration.> <First contact.>
Variable set. Next, should I emphasize the role of a Pathfinder team, or their partner AI?
<Their partner AI.> <Their team.>
Variable set. Finally, should I provide career advice for future Pathfinders, or an honor roll of former Pathfinders?
<Former Pathfinders> <Career advice.>
Setup complete. Would you like to keep these settings?
<Yes, keep those settings.> <No, let me try again.>
Thank you for choosing this Pathfinder informational VI. Implementing changes. 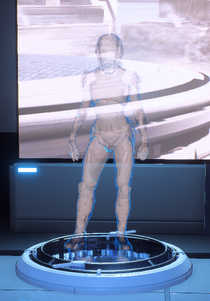 Hello. This display describes our Pathfinders, the Initiative's elite explorers.
<Tell me more.>
Pathfinders survey distant worlds and discover promising new outpost sites for the Initiative. Our colonization efforts wouldn't be possible without them.
or
Pathfinders are often the first to encounter new species, making them first contact ambassadors as well as explorers. They work hard to ensure everyone knows the Initiative is peaceful.
<Allies.>
Each Pathfinder is linked to a partner AI that allows them to study new worlds in hours instead of months.
or
Each Pathfinder has a talented team of specialists drawn from multiple backgrounds and species.
<Becoming a Pathfinder.>
Our Pathfinders are selected from promising candidates of every species. Former Pathfinders include: Alec Ryder, N7 operative. We honor him.
or
The minimal requirements are: survival training, AI compatibility testing, and military or scientific experience. If you're interested, submit your candidacy to Pathfinder Headquarters.
<Log off.>
If you see a Pathfinder on your travels, be sure to say hello. 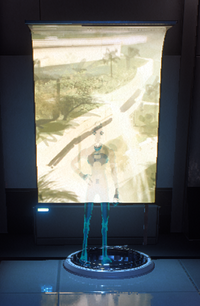 Greetings, inhabitant of Andromeda. I am a salarian. I would be pleased to tell you more about my species.
<Tell me more.>
Salarians are considered among the brightest scientific minds of the Milky Way. We're known for our quick thinking, technological savvy, and intellectual powers of deduction.
<Your home world.>
Salarians originate from a world known as Sur'Kesh. It's a tropical planet covered with oceans and rainforests. As an amphibious species, we're at home in Sur'Kesh's lush jungles—but with our technological advancements, we can adapt to nearly any environment.
<Your history.>
Cooperating with the asari, we were the second species in the Milky Way to help form a galactic government—the Citadel Council. From time to time, we also guided other species—such as the krogan—to better channel their natural gifts towards worthy pursuits. It's our belief that the careful application of science and intellect is the key to improving the quality of life for all. We look forward to studying the wonders of Andromeda and the rich diversity your galaxy has to offer.
<Log off.>
It's been my pleasure. Rest assured, the people of Andromeda have nothing to fear from salarians. 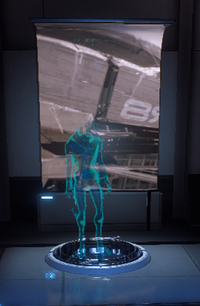