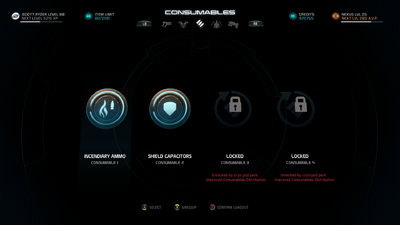 Consumables are a type of item that is consumed when used. 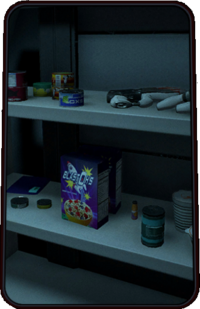 While Andromeda Initiative gear and weaponry is designed to be as versatile as possible, extraordinary circumstances sometimes arise. Pathfinders and scout forces often turn to less orthodox resources to ensure they survive hostile conditions.

"Adrenaline" is a nickname for a prototype omni-gel/OSD package. When deployed, it bypasses omni-tool safeties to minifacture (small-scale manufacture) new heat sinks and provide a temporary but powerful boost to armor.

A shield capacitor immediately overlocks a user's shields, bringing them to full power and giving them a boost. This boost is unstable, however, and will be lost the next time the shield is breached.

A life support pack boosts the environmental management systems of a user's hardsuit, enabling them to cope with environmental hazards for a longer period.

Special ammunition packs apply a variety of effects to weapons fire. Incendiary ammo coats projectiles in thermite paste as they are fired. The paste adheres to and burns through armor. Cryo ammo uses Bose-Einstein condensate to freeze an enemy or slow them. Disrupter ammo projectiles carry an electrical charge that damages enemy hardsuit systems.

The Cobra RPG package uses a volatile solution of omni-gel to minifacture a short-lived but extremely dangerous projectile. Launched from an omni-tool, it hits with the same explosive power as a portable rocket launcher.

Consumables can be found during gameplay at certain merchants, inside various containers, or on bodies of defeated enemies.

In multiplayer, "consumables" refers to both boosters and supplies. Boosters can be equipped and supplies checked in the Consumables tab.

Consumables can be purchased from the following merchants: 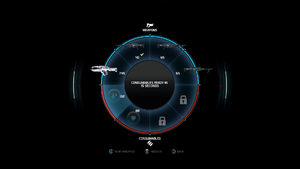 When most consumables are used, a cooldown timer starts that isn't shown on screen. This is so that multiple consumables can't be used at the same time. By opening the weapon wheel, the central portion of the menu will display the remaining amount of time until another consumable can be used.