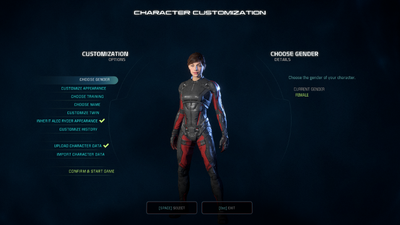 When starting Mass Effect: Andromeda, players have the option to customize a character or quick-start as either Sara or Scott Ryder.

Players can choose to play as a female, Sara Ryder, or a male, Scott Ryder.

Players can choose the default appearance for Ryder or select a custom appearance to customize their look.

There are 10 head presets available for each twin:

The player can customize hair style and color for either twin. Facial hair is available to male Ryders.

The player can customize outer and inner eye color.

The player can customize the style and color of four types of makeup. All types are available to both twins.

The player can add scars and tattoos to either twin.

Players can choose the special training Ryder received in the Milky Way before joining the Andromeda Initiative. This training determines what power you'll have from the start and what skills you'll gain early access to.

Players can use the default first name of Sara or Scott, or choose their own. If the default is chosen, sometimes characters in the game will use the player's first name.

Players can choose the default appearance for their twin or customize their look. This uses the same customization options as the player's character outlined above.

Player can choose the appearance of your father, Alec Ryder. His appearance can either adapt to your player's customization, or remain as the default version.

Players can choose the gender of the legendary Commander Shepard, first human Spectre and the Hero of the Citadel.

Checking this option uploads the character to the Mass Effect Archives website, where players can re-import it in the future or share it with friends. This option requires an active internet connection.

For players that have set up an account on the Mass Effect Archives website, this option allows them to import a Mass Effect: Andromeda character they've previously uploaded or use custom appearances that others have shared online. This option requires an active internet connection.

The set will not be displayed and there is no confirmation before the load.

This menu will give a brief summary of the current state of the customizable options. After review, the option to confirm and start the game is possible from this menu.

Once Confirm & Start Game is selected, the Difficulty menu will appear. There are five choices of difficulty:

Selecting a difficulty level will bring up a final confirmation screen. This is the last chance to make and changes before selecting to start the game.

At anytime during the customization process, there is an option to exit the character customization menu and not save any changes. There will be an on screen prompt of this so that any changes aren't accidently lost.

Either of the Ryder twins' appearance after initial creation can be modified during the game by using the Facial Reconstruction Suite in the Tempest Med Bay, which becomes available upon returning to the Tempest after establishing Prodromos.

The specific weapon found during the objective Optional: Collect ammo and additional weapons during the mission Planetside is tied to the training selected during character customization.