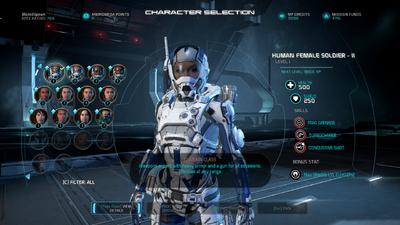 Character Selection is used to choose a multiplayer class character kit from a variety of options, including different species and profiles.

There are a limited number of actions that can be completed in this menu. It is really for selecting the character to play during matches.

The currently chosen character kit will have a green check mark

The currently chosen character kit will display statistics on the right side of the screen with the current rank, current level, current XP to next level, health, shields, skills, and bonus stat level for the kit.

Only Common character kits are available at the start of multiplayer gameplay before any packs have been purchased and/or claimed from the store. 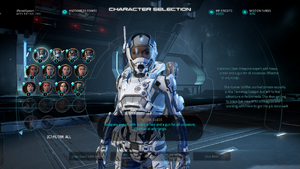 Choosing this selection will switch the view from the statistics menu to a small description of the currently selected character kit.

This is the mechanism for changing the character kit to a newly selected kit from the available choices. This allows for the selection of a character kit from different character classes and seven different races to play thirty-six individual unique multiplayer characters.

This name of this option will change to Select And Customize if the currently viewed character is not the selected character. This will select the character and go to the Character Customization menu. 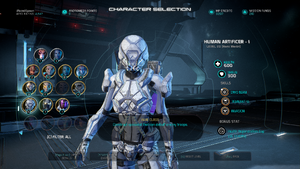 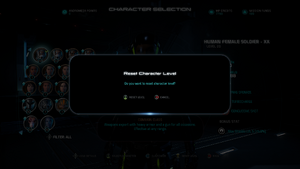 Once a character kit reaches Level 20, a new option called "Reset Level" will be added to the lower portion of the Character Selection menu. This IS NOT a Character Respec card that resets skill points. This does not reset the rank (I-XX) of a character kit. This resets the character kit back to level 1. All skill points will be reset back to the minimum amount of Level 1. All skill points from gaining levels will have to be earned again. Selecting this choice will bring up a confirmation menu allowing you to change your mind before making this choice.

Exits back to the multiplayer main menu.