The Character Respec can be purchased from the multiplayer store for 15 Mission Funds or acquired from packs purchased in the store. Upon acquisition of a card, a new option is added at the bottom of the Skills screen. The number of respecs available is shown in parentheses. 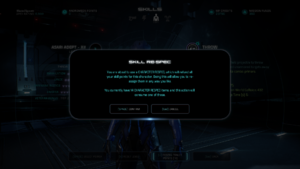 Selecting "Respec Power Points" brings up a confirmation screen. Confirmation will reduce the number of available respecs and refund all but three skill points. A single point will remain assigned to each active

power. Re-assign points as desired, then select confirm and exit.

This does not reset the level of the character. Resetting a character level can only be done once the character reaches Level 20 in the Character Selection menu with the Reset Level choice.

Using a Character Respec does not change the rank (I-XX) of a character kit.

Veteran bonuses are acquired with character rank (XI-XX) and are also not affected by skill respec.