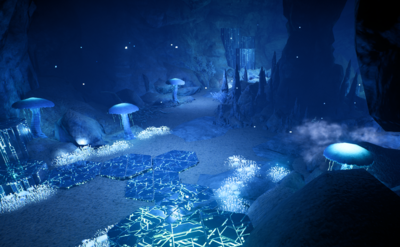 The Buried Cave is on Havarl, in the northwest corner of the Chasm of the Builders. Havarl's third monolith is located in the cave's Forgotten Depths.

The following missions take place or are acquired in the Buried Cave:

The Forgotten Depths is located in the lower section of the Buried Cave. There is a ring of ledges around this sunken area and the tops of the rock columns flatten out. Upon first inspection, it appears impossible to get to these high areas.

Cleverly hidden along one of the walls is a small section of rock sloping upward. Starting there, you can jump up to the ring of ledges. Jump on top of some Remnant columns, orient Ryder in the correct direction, and then jump forward onto the sloping ledge. This process lands Ryder about halfway up the wall. The next step looks impossible, but isn't, just tricky. Jumping again then allows Ryder to grab the edge of the top most ledge and pull up onto the ring of ledges.

Once at the top, it is possible to see large containers, minerals nodes, and the second ARCD on the large flat rock column tops by looking for small white dots against the black darkness of the rocks.

The path appears unnavigable; some slopes seem too steep and some jumps seem too far. It may take a number of attempts to reach the top. Once there, however, it is possible to see the rewards by looking for small white dots against the darkness of the rocks: an ARCD, two containers, and three rare mineral modes.