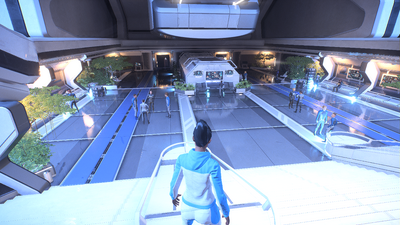 The Atrium is located on the Habitation Deck on the Hyperion.

The following missions take place or are acquired in the Atrium: 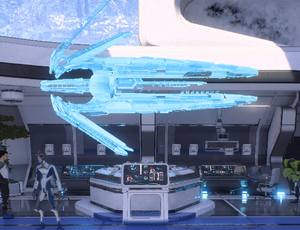 After Meridian: The Way Home, a Memorial exhibit will be added to the atrium.

Ark Hyperion. Departed Milky Way 2185. Arrived Andromeda 2819. Current status recorded as: Meridian.
Please select a topic.
<Memorial to the lost>
Ark Hyperion has been declared a monument to those who lost their lives in service of the Initiative. A plaque has been placed at the highest point of the Hyperion superstructure. It reads: We turned our backs upon a dwindling star, to chase a dawn beyond our childhood's end.

<Defense and landing>
The Hyperion was shepherded to its resting place by a collation of allies who stood as one against the kett Archon. Pathfinder [Sara Ryder/Scott Ryder] spearheaded the defense and remains assigned to Ark Hyperion despite its reclassification. "Landing Day" has been proposed as a cluster wide holiday. Status: pending.

<Meridian integration>
The transformation of Ark Hyperion into Port Meridian continues both above and below the surface. This includes the planned integration of Initiative and Remnant technologies, pending further research. Port Meridian is currently powered by repurposed Tantalus drive cores, which require the frequent discharge of static energy. This causes a unique visual phenomena during Meridian's night cycle that has been dubbed aurora meridiani.

After the events of Meridian: The Way Home, this area is located at Port Meridian.

Despite the objective stating Search for supplies in the Hyperion Atrium during Task: Better Crafting, the Milky Way hops are actually found outside the Atrium on the Habitation Deck.