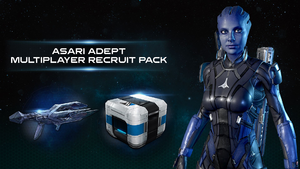 The Asari Adept Multiplayer Recruit Pack is an add-on multiplayer DLC content pack that can be purchased from licensed vendors (Microsoft Store, PlayStation Store, Origin). This add-on can be discounted with a subscription to EA Access. 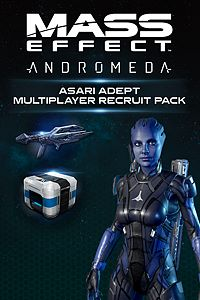 Join the fight to save humanity well equipped with the Multiplayer Recruit Pack – Asari Adept Edition. This pack offers everything you need to hit the ground well-armed and ready for battle.
- The pack features the Asari Adept character, a great starter class known to be fierce, graceful warriors. Lightly armored, with a focus on biotics as the primary form of attack and defense, Asari specialize in crowd control and damage.