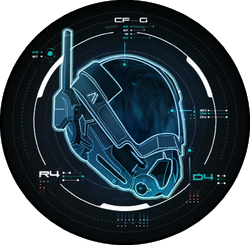 Armor is defensive equipment designed to provide protection from the hostile environments and equally as hostile enemies of the Heleus cluster.

There are four categories of armor pieces available to the Ryder - Arms, Chests, Helmets, and Legs.

Blueprints for researched and Andromeda Initiative-issued armors are unlocked at specific levels. Found and purchased armor levels up on the same schedule as AI-issued blueprints. Once a new tier is unlocked, prior tiers will not be found or available for purchase during gameplay.

Armors fall into three technology types based on where their supporting tech comes from.

Armor falls into one of four categories: common, uncommon, rare, or ultra rare. Each armor rarity icon corresponds to a color coding. As rarity increases, the value of the armor increases as well.

Armor that is crafted uses the same light blue colored icon, no matter the rarity.

Armor can be purchased from the following merchants:

2 The Deep Space Explorer and Scavenger Armor sets are available exclusively to players who purchased the Deluxe or Super Deluxe Edition.

The following achievements and trophies can be earned which are related to Armor: